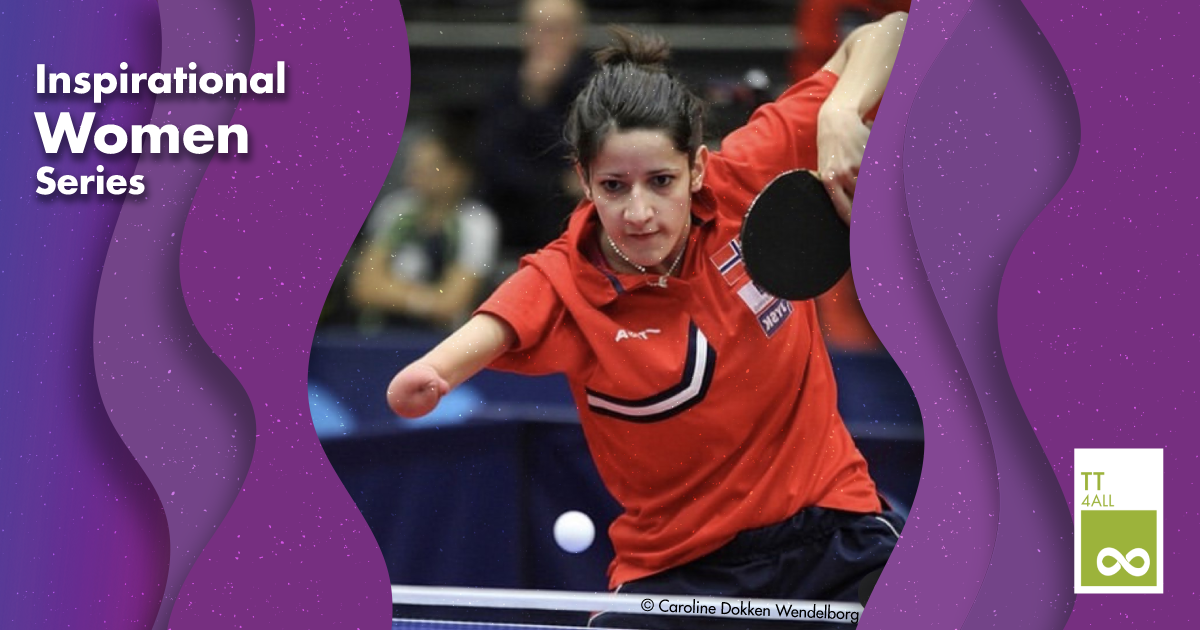 Aida is like everyone else. Yet, she had to face obstacles and discrimination in her life. Nevertheless, she stayed focussed on the things that really matter and has managed to evolve from these pains and challenges leading her all the way to the Paralympics with table tennis.

Norwegian Para table tennis player Aida Dahlen is currently ranked on position 3 in women class 8, participated in the Paralympic Summer Games in London 2012 and Rio 2016, and qualified for Tokyo 2020 – but she has come a long way to make it this far:

Right before the war in Bosnia and Herzegovina broke out in 1992, Aida was born without a left forearm and with a left leg amputated below her knee. At the age of 6, she was adopted by a Norwegian family.

How it all began

After trying out different sports, where she sometimes struggled due to the high amount of running, she came across our beloved sport, table tennis:

“I started playing table tennis when I was 12 years old. I had played both handball and football, but knew I wanted to do something else. A friend of the family suggested I try table tennis. After my first training in the club, I said to my parents: this is a sport I can become good in.”

How table tennis has impacted her life

“Table tennis made me feel confident. It was a sport I could become very good in, and I wanted to see how far I could go. It has also made me stronger physically and opened my eyes. To be hungry for more knowledge, to evolve as a player, [it] made me the person I am today. I am very grateful for all that it has taught me.”

Playing alongside people without disabilities, Aida is training in her home country Norway up to 20 hours per week. The most appealing aspect of table tennis to her is that she felt that it was a sport she could master, and that it came very natural to her.

Strength born out of discrimination towards disabilities

NoBody is perfect! Unfortunately, not everybody can see that, and too many people still treat others with disrespect. In general, life is more difficult for people with disabilities and they have to work even harder and be more creative when doing a specific task.

“[…] For example, putting my hair in a hair tie. That was difficult at first, but I did not give up, and managed to learn a way.”

Especially in her teenage years, Aida Dahlen had to spend a great deal of time with people who mistreated her. Thanks to a friend, she learnt how to deal with it.

“I had a tough time, especially in junior high school. Being different in a time when everybody is trying to figure out who they want to be, is never easy. I did not want to be different. I also had a classmate, who every day picked on me for the way I was. Thankfully, I had a good friend, who stood by me throughout the years, and made me stronger. She made me see that no matter how he treated me, I had people who cared about me, and that was the most important thing. We choose who we want in our lives. I chose right in having her.“

Aida’s advice for people who are facing similar problems is to stay strong and that it will get better. She remembers thinking it was too tough for her. But now, she is stronger because of everything she had to go through – underlining that it is definitely not ok to be treated badly. NEVER. She is telling you to stay strong! You will get through it and appreciate the good people you have around you.

Next to her successful career in table tennis, she started her bachelor studies in Sports Science at the Norwegian School of Sports Science, as she is beginning to think about a life after table tennis. She was afraid, she said – which is absolutely understandable, not knowing what the future might hold.

“I lived and breathed for table tennis. Now I am a part of many different things, which makes the time to come exciting. I am hoping to be a part of the sports industry still, but in what way, I am not sure. It´s too early to say. I have enjoyed my time as an athlete, and it has given me so many opportunities. [The interview] here, is a dream come true for instance. I hope I can contribute to the community in some way or another. Maybe even a coach in the future. Who knows?”

Aida’s advice to girls, women and everyone else

Even though Aida faced different and significant impediments, she always managed to shake them off. Thanks to the support of her family and friends, she was able to rise again and grew persistence, strength and optimism.

“If you get a challenge that might seem impossible to solve, take it. You will grow so much from it. You will also understand the feeling of accomplishing something. That is a pretty great feeling.”

So, if you are struggling and thinking about whether or not to jump over the hurdles:

“Stand up for yourself. Know your boundaries. Say yes to new experiences, but learn when to say no. You come first.”

We at the ITTF Foundation would like to thank Aida Dahlen for her openness to share her inspirational story and her trust in us to spread the word through our Inspirational Women Series.