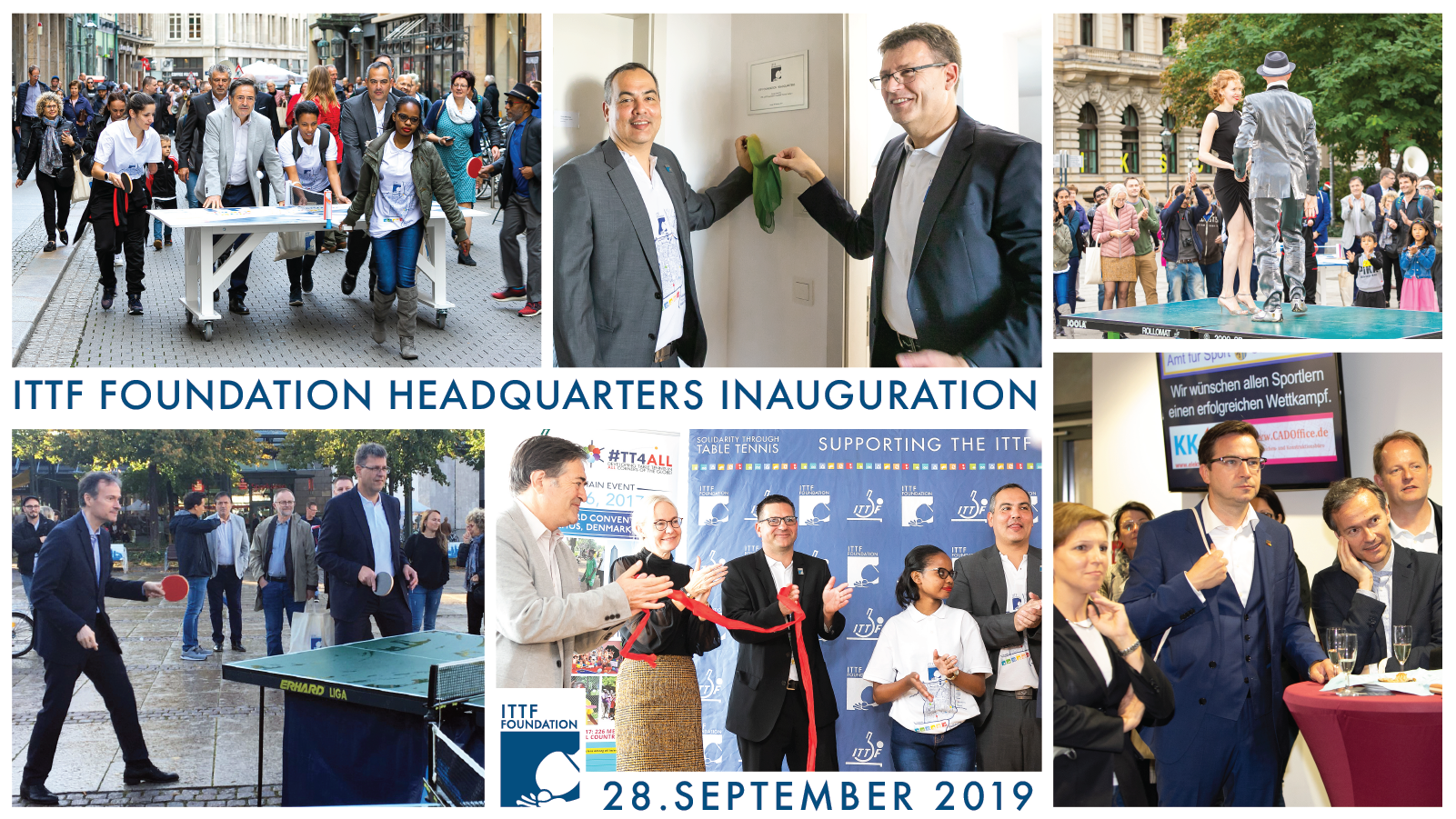 Table Tennis in Leipzig - Rain, Fun & Love on the Streets

Staged on Saturday 28th September, the inauguration of the ITTF Foundation headquarters was held in the German city of Leipzig; a day which attracted large numbers, thus reflecting the very nature of the initiative that promotes harmony, solidarity and understanding between the 226 member national associations and some 30 million competitive players.

Proceedings commenced at 11.00 am, eventually concluding at 7.00 pm; a whole range of activities grabbed the attention. Notably at 2.00 pm there was an official reception for 60 VIP guests, followed at 3.30 pm by a procession through the city centre; at 6.30 pm the day concluded with a civic reception at the Sporthalle Brūderstraße.

“One of the reasons the ITTF Foundation is in Leipzig is that the city is very open to the world, as the most developing city in Germany, it acts as an intercultural hub. We have outstanding support from the city council and continued good relations with the University of Leipzig.” Thomas Weikert

“It was a great sport and cultural experience that showcases the relation between the city of Leipzig and the ITTF Foundation. I covered 10,370 steps today! Even some rain in the afternoon and strong wind couldn’t prevent people from playing table tennis and showed that the Foundation goes forward, beyond any obstacles that might appear in the way.” Petra Sörling

“The creation of the ITTF Foundation is the natural consequence in the evolution of the International Table Tennis Federation’s work in the area of social responsibility. Being an International Federation with global presence, the ITTF not only aims to increase the level of table tennis in every corner of the planet but also to use table tennis as a vehicle for social cohesion and awareness, ensuring the word Solidarity is always present in our daily activities.” Raul Calín

Also the city of Leipzig was represented; Heiko Rosenthal, the Sports Mayor was present and clearly delighted with the occasion.

“I’m pleased about the decision to have the ITTF Foundation locates in Leipzig. The ITTF strengthens our profile as a sports city and contributes to the strong tradition.” Heiko Rosenthal

Notable guests and there were more, Joël Bouzou, President and Founder of Peace and Sport and Iris Vlachoutsicos, International Relations & Sports Diplomacy Director attended as did Wolfgang Baumann, the Secretary General and Board Member of the Association For International Sport for All (TAFISA). He expressed the view shared by all to work closely with the ITTF Foundation, an opinion that was also shared by Ahmed Latheef, Maldives Ambassador to Germany.

“The ITTF Foundation establishment demonstrates the way in which the ITTF looks at table tennis and the world, to setup dialogue that can create better social cohesion. The ITTF is a leader of gender equity and you understand that sport is much more than sport.” Joël Bouzou

Promoting the event, four role models in the guise of Norway’s Aida Dahlen, Sweden’s Matilda Ekholm and Cameroon’s Sarah Hanffou from the world of table tennis attended, alongside Germany’s Jens Greve, Founder and Chief Executive Officer of Yuvedo, an organisation that promotes the benefits of table tennis for Parkinson’s therapy. Sarah Hanffou is the ITTF Foundation Ambassador.

“To be an Ambassador means a lot to me because of what the ITTF Foundation is doing; making a difference and changing lives. You have a huge impact and I’m thankful for the opportunity to work together in advancing social change.” Sarah Hanffou

Made possible by the many volunteers from local table tennis clubs, it proved a busy day in Leipzig, an open air market plus the presence of thousands of football fans gave many the chance to watch table tennis on display. Even rain and strong winds did not prove a deterrent; the appearance of a marching band play “Dixieland” music with its rolling table tennis table (TT2Go) added to the occasion. Simply, the importance of sport in society and the role of the ITTF Foundation was endorsed.

It was a wonderful day where we shared our happiness of having our home for the Foundation in Leipzig. We shared the passion for table tennis bringing it to people on the streets, mixing it with culture and arts, together in the right environment in safe spaces that brought the people together. As a legacy of this event the Foundation donated a permanent table in a local park; accessible for everyone to play.

I would like to thank all distinguished visitors mentioned as well as all staff and volunteers who worked during the event behind the scenes, specially Wiebke Scheffler and Julia Tappendorf for the heavy logistics, Leutzscher Füchse, ITK Universität Leipzig, MoGoNo, HTWK and Roter Stern Leipzig for the local support and last but not least Steve Dainton, ITTF Chief Executive, for supporting this project from the very beginning.

Certainly, a day to remember!