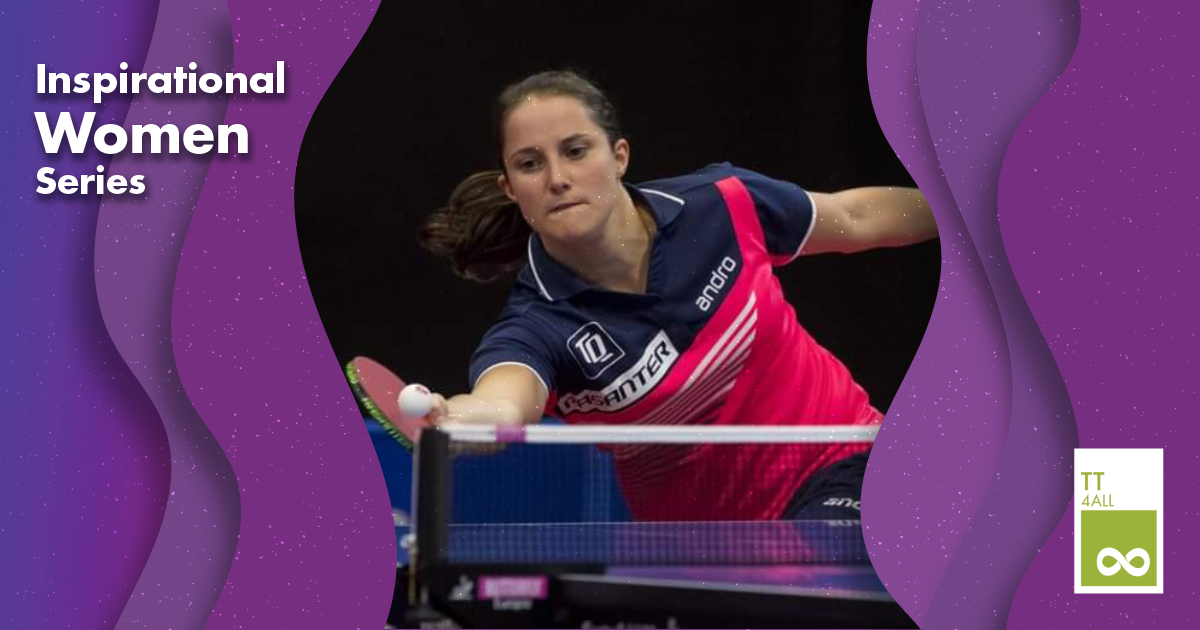 The Inspirational Women Series are a set of interviews that spotlights women from our table tennis community – those who choose to go above and beyond. We all know Sabine Winter as a member of the German national team, but did you know that she supports social causes?

Sabine began to play table tennis by accident at the age of 6 – yes, an accident. Her father Mark Winter had a snowboard accident and broke his leg. Since he could not move, he was sitting on a chair. In order to kill boredom, he played balls to her daughter on a table tennis table in the basement.

However, that was not the beginning of Sabine in our beloved sport. Four years had passed until she decided to practice table tennis as her main sport. The German player commented that playing at the age of 10 is not very impressive when we see 3-year old kids playing table tennis nowadays. Nevertheless, she managed to become a member of the German national team and multi-european medalist through passion and commitment. But that was not enough for her, so she got involved with a project from Kampala, Uganda, called Slum Ping Pong.

First involvement on the field

In June 2018, she received a message from Emmanuel Bale, the project leader of Slum Ping Pong, who told her that kids loved a video of her playing ping pong at the top of a mountain. Sabine got curious about the project and wanted to know more about it. She received many photos and information in return:

Her father Mark Winter was impressed by the fact that the project had been running for about 15 months with no measurable financial support.

“The kids in the videos had already reached a standard level, which can only be achieved with good coaches and regular motivated training. [My father] found it exceptional that they could achieve what they had with such little means, in such difficult circumstances.”

Eventually, Sabine became the Patron of Slum Ping Pong. She does not only help the project with money and equipment, but she also supports them in everything she can – like helping Emmanuel and the team to successfully apply to the ITTF Foundation TT Dream Building Fund.

The German player is happy about raising awareness for Slum Ping Pong via social media:

“They are not unknown in Germany and 3 other table tennis clubs have been supporting them. In my view, the most important of all has been to help the Slum Ping Pong’s dream of supporting kids from the slums to go to school by finding kind sponsors.”

Thanks to her promotion, a family near Düsseldorf, Germany, contacted her to send 50 new bats and pay the school fees for 20 children. At the time of the interview, Sabine had finished her 3rd table tennis shirt sale, which also included table tennis clothing from some of her German national team friends. So far, she has raised over €3,000. Now, there are more than 50 Slum Ping Pong kids whose school fees are sponsored, more than 40 from Germany.

Desire to help others

Doing something good has always mattered to Sabine.

“Life has been good to me, although of course I've also had to work hard to make it work. There are many, not only those born in poorer countries, who through no fault of their own have a much more difficult route even if they are ready to work hard. These are the people who I feel need to be helped if one can.”

About her experience with the Ugandan project in the last two years she said:

“It's a very nice feeling for me to know that I have been able to help Slum Ping Pong a little. They don't take support from us or others for granted and are always grateful for small things.”

However, Sabine pointed out that all the credit belongs to Emmanuel, his brother Fate, Dan and other coaches, who are responsible for keeping Slum Ping Pong running.

Sabine’s advice to girls and women

Sabine believes that one main obstacle is the absence or rather the lack of female coaches to motivate and empower girls playing table tennis. To girls and women out there who are afraid of taking the first step:

“Whether you are a girl thinking of playing table tennis or a woman thinking of starting or supporting a table tennis project, I know how much pride and pleasure I've got out of being a part of Slum Ping Pong. My message is: GO FOR IT – I'M SURE YOU WON'T REGRET IT!!!”