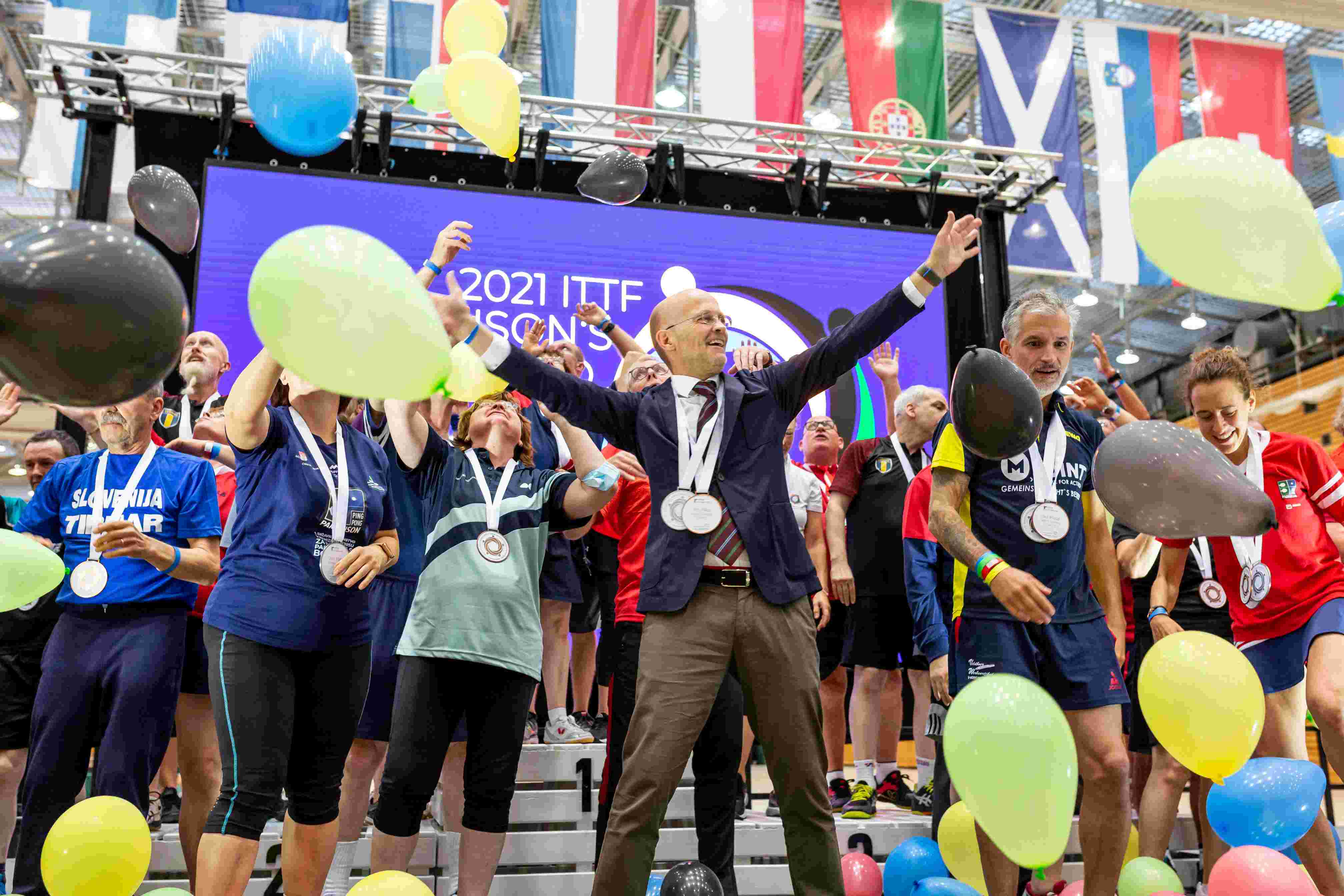 Three days of actions and networking at Horst-Korber-Sportzentrum Berlin crowned many Parkinson’s World champions and left life-long friendship between players across continents. The ITTF Foundation has released a 6-minute documentary that captured the best moments of the tournament.

The Parkinson’s World Table Tennis Championships (PWTTC) 2021 were more than a competition. It was a global celebration of life and an open arena for the Parkinson’s fighters. Hosted by the Berlin based not-for-profit YUVEDO Foundation, the tournament saw 135 athletes from 21 countries pursuing medals and companionships in our favourite sport. 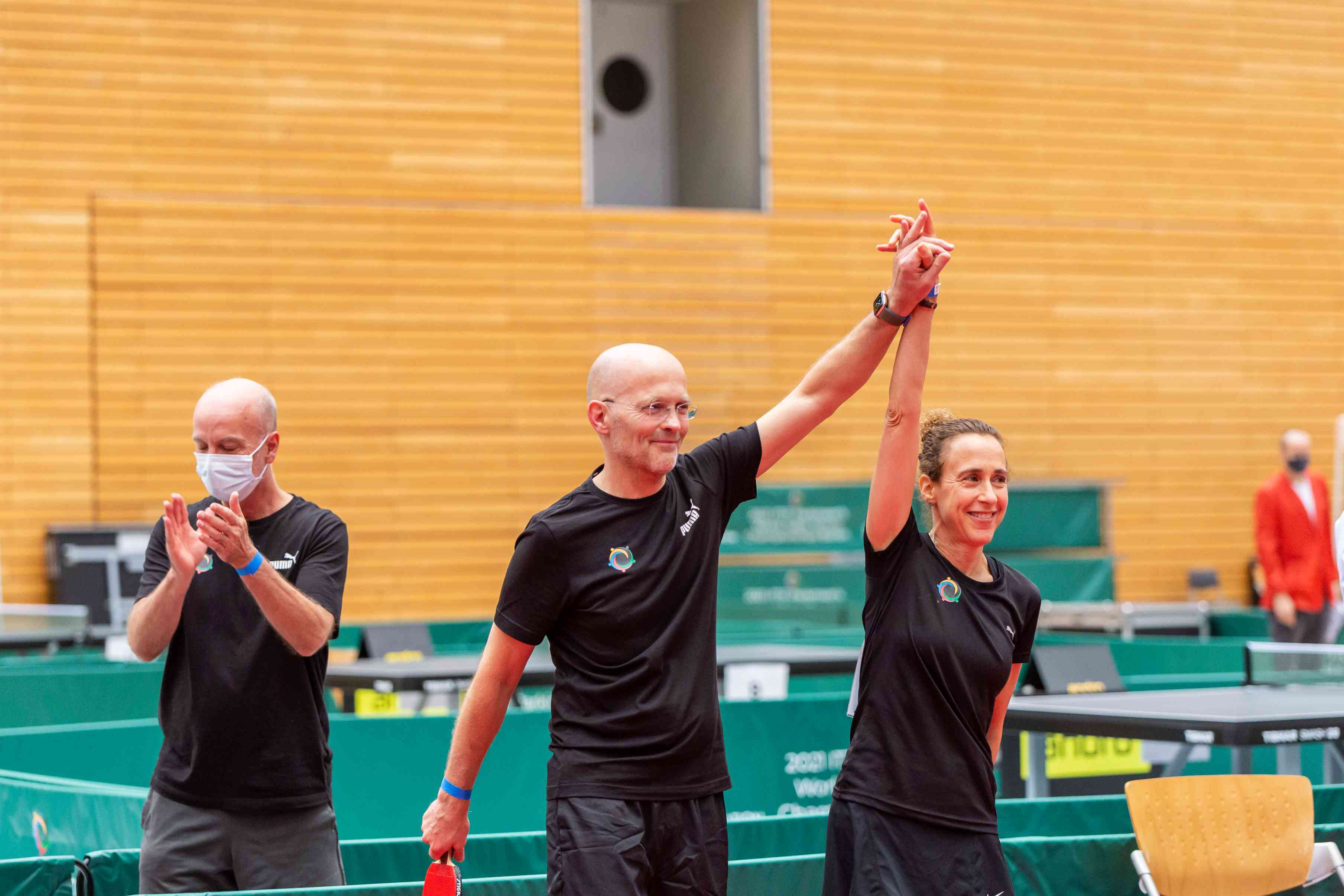 People with Parkinson’s deserves to be celebrated. The disease is such a heavy burden, and we are fighting against it every day. Table tennis is an inherent part of our rehabilitation and this world championships is the highlight. This tournament is dedicated to all Parkinson’s fighters out there. The society should see that we can play table tennis just as good as anyone else, even with our conditions and physical impairments. – Jens Greve, founder and Managing Director of YUVEDO Foundation, Parkinson’s fighter.

The ITTF Group is honoured to be a part of the movement in promoting the health benefits of table tennis for people with Parkinson’s. As our motto Table Tennis. For All. For Life goes, the ITTF Group believes in the power of table tennis in being inclusive. It is a sport for everyone to enjoy, regardless of age, gender, or physical conditions. Parkinson’s World Table Tennis Championships is a perfect example of this and we are happy leading the journey in making these championships bigger and more accessible for the Parkinson’s community. – Steve Dainton ITTF Group CEO 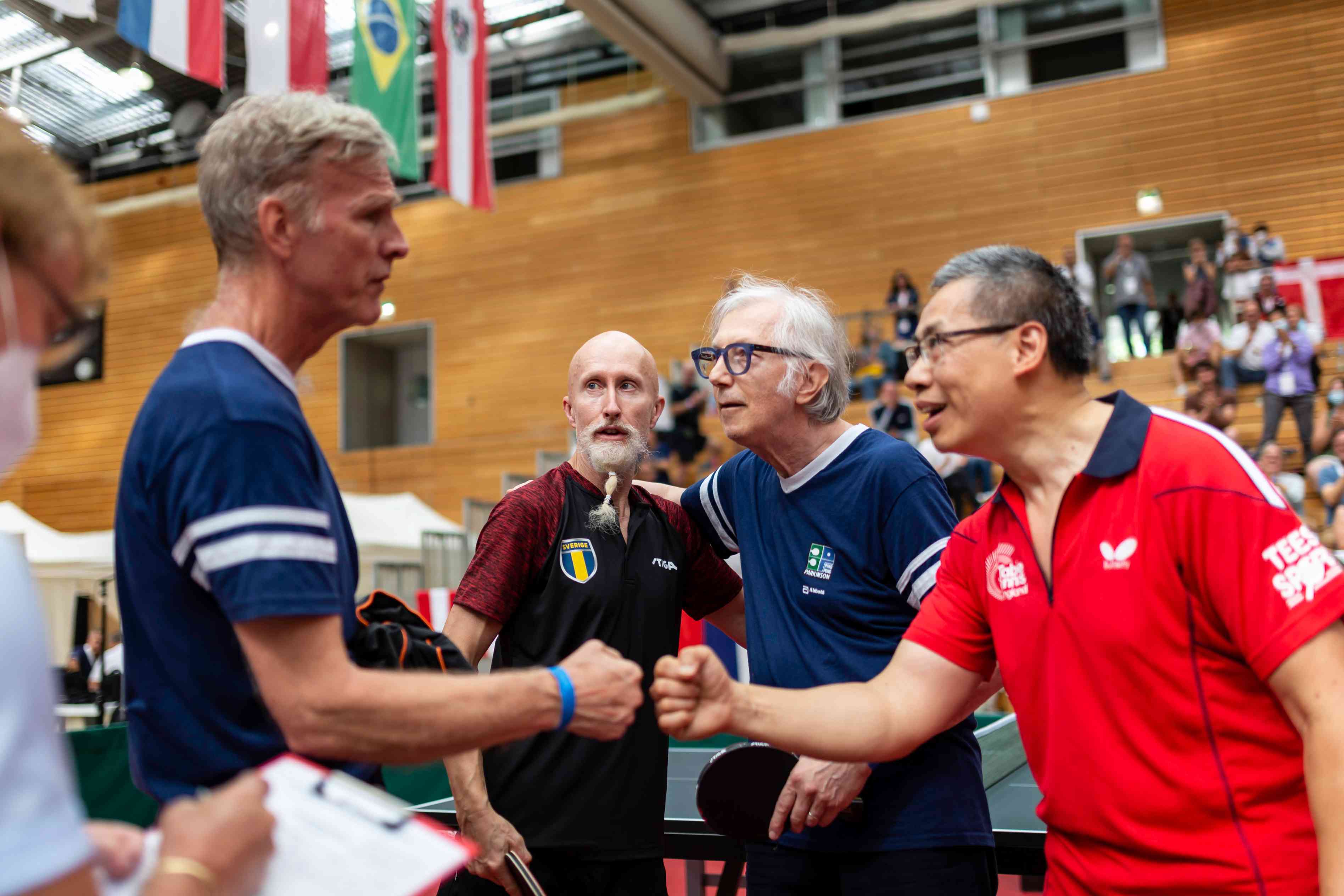 A party for the Parkinson’s fighters

Supported by the ITTF and ITTF Foundation, this second edition of PWTTC has excelled in both creativity and execution.

The ITTF President Thomas Weikert and Vice President Petra Sörling were also happy to be there to support the Parkinson’s fighters.

The players at PWTTC have brought our motto Table Tennis. For All. For Life to live. We have witnessed the strength and determination of those payers that would remind the world not to give up, even when facing obstacles. At PWTTC, winning is only secondary, participating and playing table tennis is the main goal. – Thomas Weikert, the ITTF President. 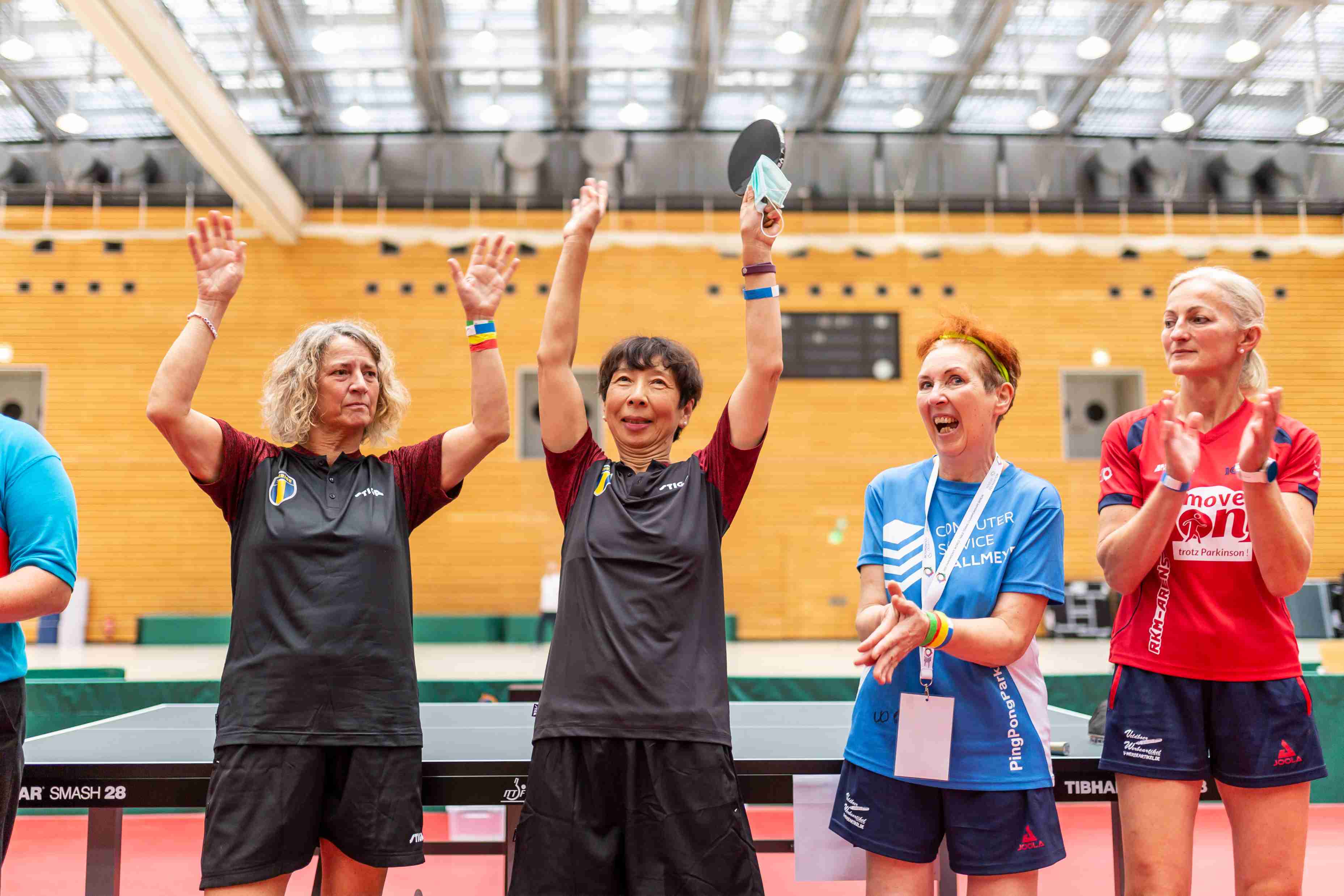 Table tennis is joy for everyone. We are at the beginning of a long journey in promoting the health benefits of table tennis for Parkinson’s fighters. The PWTTC is the ITTF Group creating history with the Parkinson’s community, and this would be our legacy for the future generations. – Petra Sörling, the ITTF Vice President. 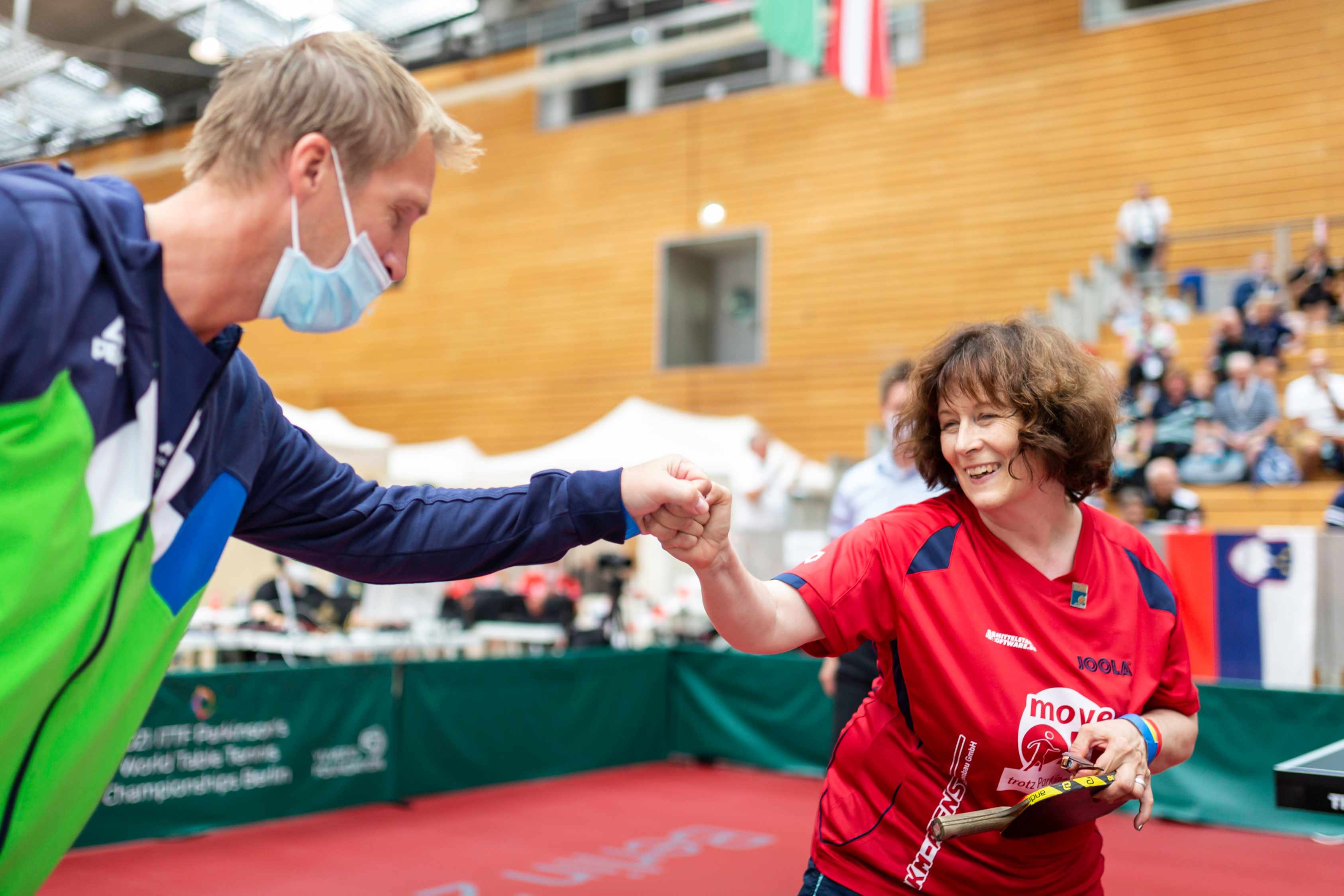 The PWTTC started in New York 2019 with just a small idea of our Group CEO Steve Dainton. That tournament was a success thanks to the founder of Ping Pong Parkinson USA Nenad Bach. After a year of break due to the pandemic, the PWTTC was back in Berlin and we were thrilled to see how the championships has scaled up thanks to Jens Greve and his enthusiastic team. We are adapting the table tennis rules to the needs of people with Parkinson in order to make the sport more inclusive. There are many similarities with Para Table Tennis, like those adaptations and also the grouping by classification. For those reasons we started a cooperation between both movements. For example, the Competition Manager was Pablo Perez, ITTF Head of Para Table Tennis and Classifier whom is helping us to improve the PWTTC. While we are still experimenting competition format, adaptations and classification system I feel that we are getting closer to get our standards. Players are already completing a comprehensive survey post event and together with our internal reports we will fine tune for the next PWTTC in Croatia 2022. The bidding process to host future PWTTC editions will be open before the end of this year and we hope to have many interested countries. – Leandro Olvech, ITTF Foundation Director

The element of surprise

PWTTC 2021 was by no means a regular table tennis tournament. Written by Mic Donet, semi-finalist in The Voice of Germany, the anthem of PWTTC 2021 “One for All” was released for the first time during the opening ceremony. The mellow tunes and the sing-along have set the perfect ambience for the competition, foreshadowing the togetherness and the collaborative narrative of all Parkinson’s fighters, inside or outside the arena.

Representing the Republic of Maldives, Ambassador Ahmed Latheef has been one of the key driving forces behind the Ambassador play. Thanks to his support, the teams received the flag of their countries from the respective Ambassadors during the Opening Ceremony. Afterwards the diplomats were able to play some table tennis and were briefed about the Ping Pong Diplomacy, which has been declared by the ITTF Group as the topic for the 2021 and 2022 biennial.

This is a unique event that all of us would remember for a long time. Table tennis is a great vehicle to build friendship and comradery. It is a sport anyone can enjoy at various levels and us, the Ambassadors, were honoured to be here to support our fellow players. – Ahmed Latheef, Ambassador of the Republic of Maldives. 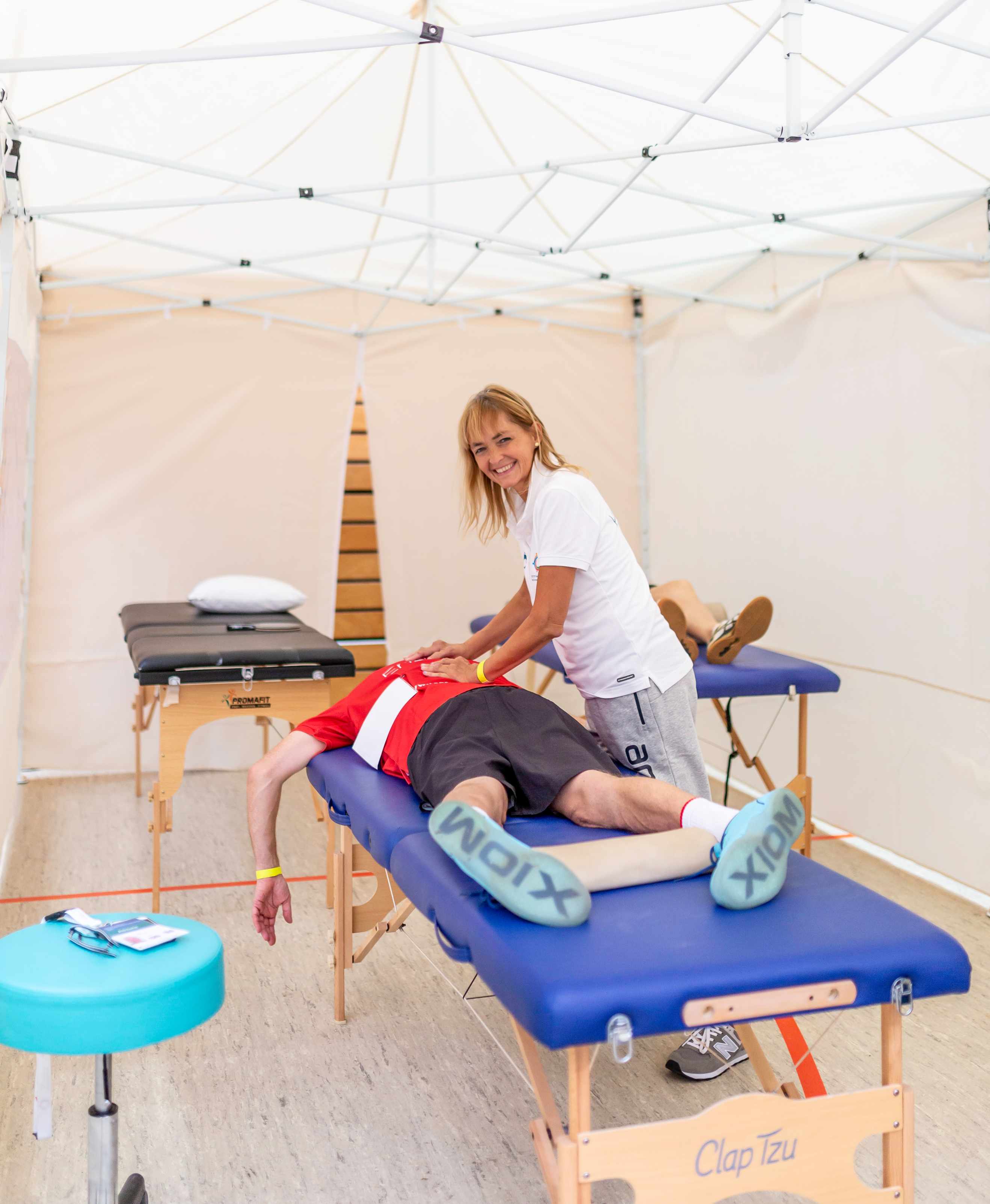 A festival of joy and pamper

With the well-being of the participants at heart, a nap zone and a physiotherapy station were also a part of the set-up.

Sleepiness is one of the key symptoms of the Parkinson’s Disease. We have set up a nap zone for those who wishes to rest in the arena, as well a tent for physiotherapy if our players need to relax. – Jens Greve.

Without surprise, the nap zone and the physiotherapy station were the most popular among our players outside the field of play.

The PWTTC 2021 was for sure a tournament to remember. Thanks to dedication of the YUVEDO Foundation, Deutscher Tischtennis-Bund, the ITTF officials and volunteers, the bar for the PWTTC has now been raised high. Thank you to all the players who joined us in Berlin for this amazing journey, and all eyes on Croatia for the PWTTC 2022.