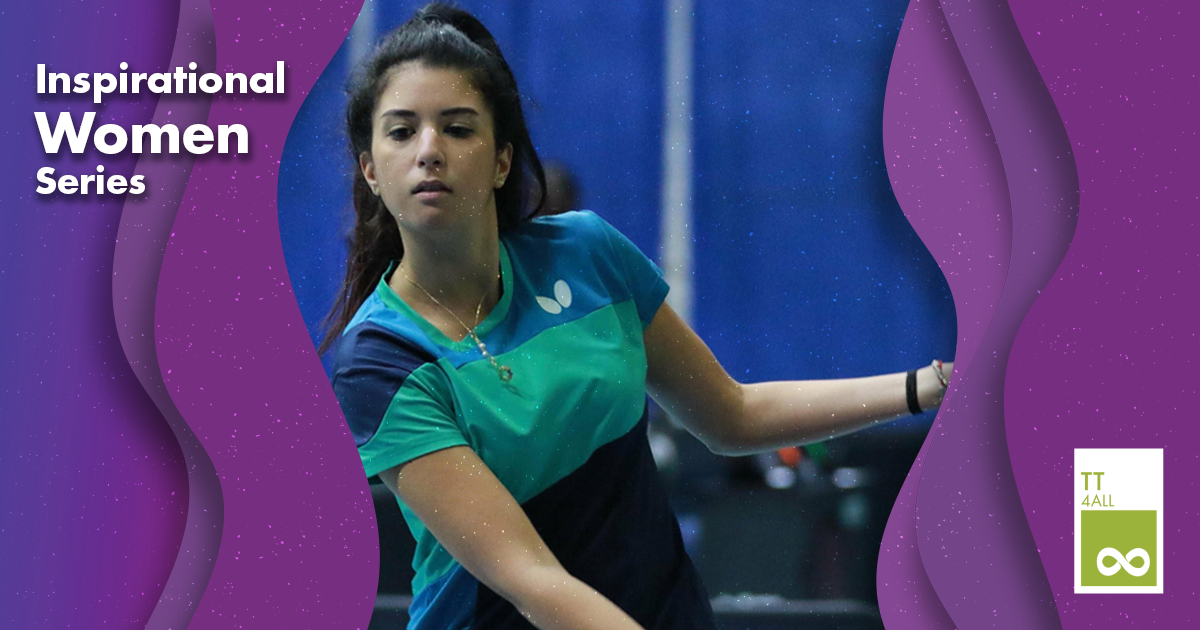 Striving for gender equality in and through table tennis: Mayssa Bsaibes

If you have not heard of the name Mayssa Bsaibes, it is only a matter of time. IOC Young Leader, WTTD Promoter, PhD student in Gender Equality in Sport in Lebanon, table tennis coach and instructor: Mayssa shares how circumstance of her journey so far has shaped who she is and her fight for gender equality in sport. And it seems like she is only getting started.

Through role models, her heart found its way to table tennis

Mayssa started table tennis when she was 8 years old. Her initial love for this game grew when she first saw her sisters play table tennis.

“I directly went to my father and told him that I want to become a champion like my sisters, they were my role models.”

This is how she started, very aware of the need for role models one can identify with to make a little girl dream. Her talent and training quickly paid off as she was ranked 1st in Lebanon for 10 consecutive years, from 11 to 21 years of age. Mayssa holds a Bachelor degree in Architecture and an MBA in Management. However, having her heart set on table tennis, she decided to shift her career into sports. Mayssa currently teaches Physical Education at Antonine University and is the only female coach in the table tennis university-league in Lebanon. Although her sisters remain high on the list, Mayssa now draws inspiration from Dina Meshref and Bernadette Szocs with whom she has become friends.

Ever grateful to table tennis

Mayssa shared that in 2009 her sister, Rouba, passed away. She stopped training for a half year and feels that without table tennis and its community she would not be here today. Mayssa was only 16 years old at the time and felt powerless because it’s not something she could fix and had never felt so hopeless, so alone. In time, she managed to get back up and even though she lost her sister, she started spending more time with her other sister, with whom she trained and developed an even stronger bond. As she put it:

“We always played for her. Table tennis played a big role in my mental healing process. I am forever grateful to it.”

Mayssa's optimistic outlook on life can be witnessed in her description of this challenging time in her life as a moment which made her stronger, it made her more confident in her work as a coach and instructor.

Gender Equality is not a project; it's having an equal voice

Mayssa points out that empowering women and girls has been something she had naturally done with the women and girls around her entire life, not always through projects. She reminds us of the importance of having a voice. Mayssa shares that, most of the time, she simply listens and encourages them as her students share their personal experience with her. Conscious of her leadership role in teaching physical education, she also knows the reality that some of her students have not told their parents that they are studying physical education. Her classes are mixed, so it’s a great opportunity for Mayssa to raise awareness on the topic. More recently, Mayssa has included lectures on gender equality, and it all started because she was hearing statements such as: “I cannot believe I lost against a girl in my table tennis exam” from some of the students. In her own words:

“I believe that every girl should have the chance to experience the power of sports for herself and challenge the prejudices.”

Growing up in training, Mayssa shares having faced discrimination as the boys did not want to train against her and her sisters. She mentions having a very supportive father who would encourage them playing at home. Even then, when they were winning against the boys, it was not winning but losing against a girl. This made the sisters train even harder, but also fight for dignity and recognition beyond their gender. This is when boys accepted to train with them. But like all the girls, when competing against a guy and win, they say “Oh! You lost against a woman!” Mayssa sees many gaps and challenges remaining for sport, and table tennis specifically. Despite all this, she does see positive steps being taken:

“Gender equality is not a campaign or a captivating hashtag, it is demand and determination. Female coaches and leaders in sports are very few. Women are slowly reaching the top positions and must work twice as hard. We need to create Worldwide committees that motivate the agenda of leadership positions. Nowadays, committees only care about athletes. It is time to change, not only in participating but also in leading. In the Middle East, women involvement in sports is ignored and some of the public schools and universities exclude physical education from the curriculum.”

In 2021, the first female member of the Lebanese Federation has been elected. It is Rita Bsaibes, her sister.

Mayssa is just getting started. In 2021, she will start her PhD on the topic of Women Representation and Leadership in Lebanese sports. What drives her:

“In Arab countries, girls, whether they were players, coaches or in the administration, still lag behind men. My research will focus on the reason why we have a few sports representation of women in Lebanon and what to do to improve it.”

Now, as one of the 25 promising IOC Young Leaders, she is ready to take on the world, one social business idea at a time.

“On February 1, 2021, I was selected by the International Olympic Committee to be one of 25 IOC Young Leaders for the 2021-2024 program. It was a dream that came true! In this program, I will focus on my own sustainable sport-based social business under the guidance of the IOC. I am so happy to represent my country Lebanon and specially the table tennis community. Throughout my project, I will help Lebanese kids to overcome their traumas after the explosion of Beirut Port by preparing table tennis physical and mental workshops with zero negative impact on the environment.

On another note, I want to thank the ITTF Foundation since this organization was my source of inspiration. For the past two years, I always admired their work and how they used table tennis as a tool for social development and peace. Noting that, since my project in IOC is related to table tennis, I will definitely need assistance from the ITTF Foundation staff to put me on the right track in order to implement the project in my country. Table tennis for all, for life!”

“If you want to do something to bring about change in your community, you should, brainstorm all your ideas and prepare a macro analysis on the context of the project. Think in a problem, question, and solution dynamic. Know what your message is and spread it widely. Most importantly, if you want to participate you should not hesitate, try and you will find others like you, you can influence and help along the way.”

She goes on to make a statement that resembles her life dedication:

"As Nelson Mandela said: ‘Sports can change the world‘. Women will not stop until they reach the UN agenda of 50-50 by 2030! Confidence and determination will bring women closer to achieving gender equality! Let’s go! To every Arab women, do not be afraid to walk through the tunnel because at the end you will always see the light! Always..."

We thank Mayssa for her engagement, vision and for being such an inspiration for ensuring the current generation fights for equality, equity and fundamental rights. She leads by example and we are glad to count on the current table tennis generation to fight for their dreams in solidarity with the world around them.