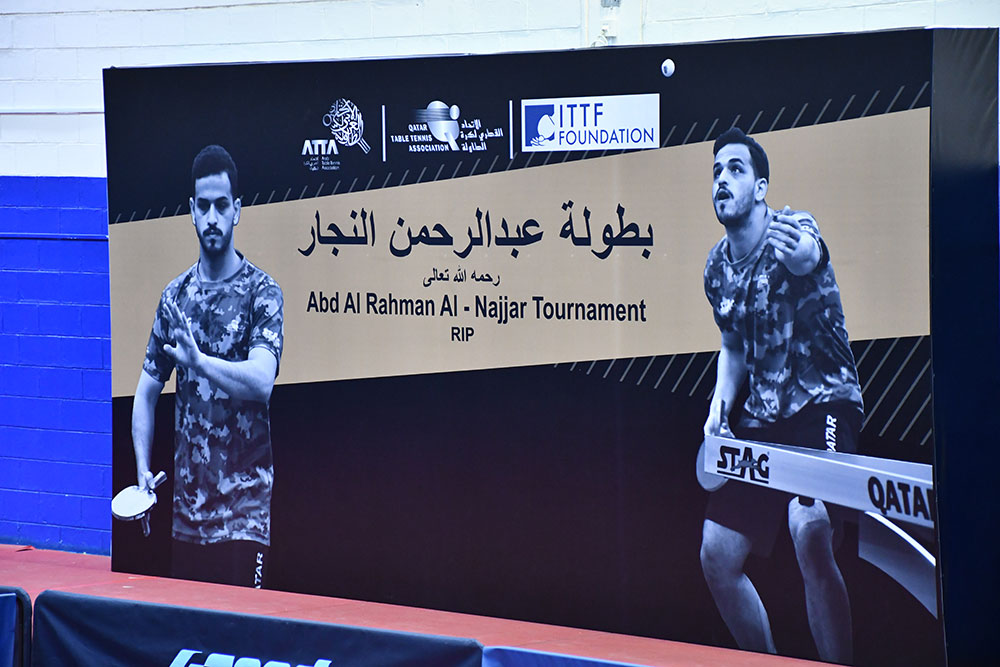 The ITTF Foundation and table tennis community is today paying respect to the hardworking and passionate young player Abd Al Rahman Al Najjar, who passed away before he could take part in the Liebherr 2019 World Table Tennis Championships in Budapest. The Qatar Table Tennis Association learnt of the news of the sudden death of a team mate, friend and supporter. His absence is being felt heavily, about two months since he died.

In honor of this great player, a table tennis tournament was organized on May 16th to 17th at the QTTA training centre by the Qatar Table Tennis Association, the Arab Table Tennis Association and the ITTF Foundation. In attendance were the QTTA & ATTA President (Khalil Al Mohanandi), QTTA board members, local table tennis Clubs managers, supporters and his family members.

“I would like to thank the Qatar Table Tennis Association, headed by Mr. Khalil Al Mohannadi, all the Board members and the brother Khalid Al Kuwari for their great interest in making this tournament a success. My son’s passing away was an overwhelming shock that we are still trying to overcome with determination and strong faith.” - Mohsen Al Najjar, Father

Abd Al Rahman Al Najjar not only inspired many young people when he won first places at the Bahrain International Cubs Teams in 2013, the 14th Arab Cup Double Cadet in 2013 and the 17 Gulf Championship Youth division in 2015 but also went on to top the Men’s Championships 2017/2018 and 2018/2019 as well as Men’s Teams and Double Championships winning both first and second places since 2016.

“I’m really sad for my brother’s death but we have to continue his life and this tournament is to ensure that Abd Al Rahman Al Najjar will always stay in our hearts and minds” - Abd Al Aziz Al Najjar, Oldest brother

“The idea of establishing this tournament came after Abd Al Rahman Al Najjar’s passing away, and we wanted to commemorate him in a worthy way with the whole table tennis family. This hero will remain in our hearts and minds, his memory will always exist because he was an example of the commitment and high morals that we hope our young players will be able to learn” - Khalil Ahmed Al-Mohannadi, ATTA President

It was our immeasurable pleasure to be part of this tournament and stay strong with all friends, family and supporters who walked this journey with Abd Al Rahman Al Najjar.