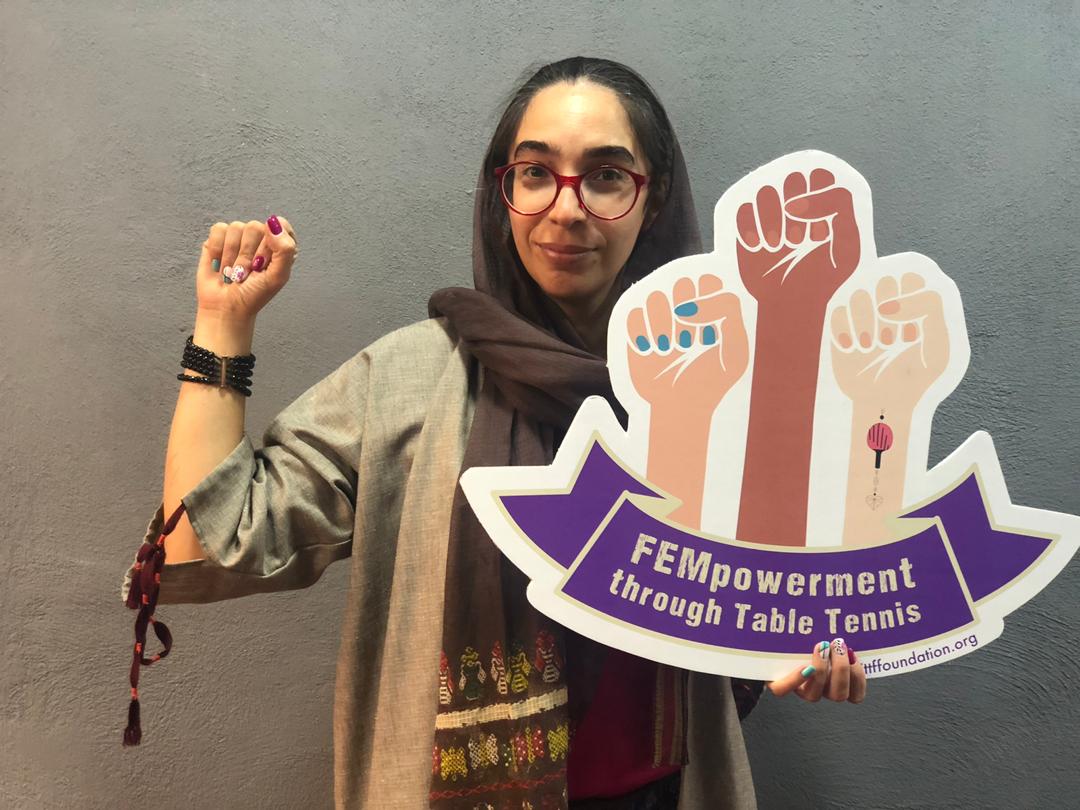 Getting the ball rolling: How our Promoters celebrated WTTD 2021

After counting down the days until 6 April, World Table Tennis Day finally came around and the table tennis community all over the world celebrated the passion for the sport while making their events universal, popular and inclusive. With this year’s focus on FEMpowerment, local Promoters all around the globe helped to further promote the campaign and empower girls and women in their communities.

Due to the pandemic, many of our Promoters had to change plans on short notice or were even forced to cancel their physical celebrations. But one thing the table tennis family does not lack is determination and creativity. Let’s have a look at what our inspiring Promoters, who were able to celebrate already, did on 6 April:

Our Albanian Promoter Klodian Gjata organised an introductory table tennis course for young women who are first-time players. Due to local restrictions, only a limited number of girls could participate in Tirana, but that did not dampen the successful outcome!

In Buenos Aires, our Promoter Omar Bentancor organised an event that offered something for everyone. The two-hour event ranged from dance and music with adapted lyrics to promote FEMpowerment to table tennis exhibitions and challenges. Highlights of this extraordinary event was the final activity, a generational game with female-only participants as young as 10 years up to 70. In collaboration with several local organisations and table tennis clubs that drive social change in their community and prominent guests like Champion from the World Games for People with Down Syndrome Juan Pablo Castet. If you missed the event, you can check out the whole stream here!

The Vlaamse Tafeltennisbond, the Flemish part of the Belgian Table Tennis Federation, challenged their local club members across the country. Over the course of the weeks leading up to April 6th, high-profile player and our Belgian WTTD 2021 Promoter Margo Degraef challenged players and surprised young female table tennis athletes with a visit at their club!

Forced to celebrate digitally due to Covid-19, the member association and our Promoter Katlego Nkwakweng organised a video shoot to transmit the FEMpowerment message. It gives athletes and administrators the chance to explain what table tennis, gender equality and female empowerment means to them, while also highlighting the celebrations for April 6th.

Our Promoter Esteban Maroto Coto organised various events across the country to deliver the message of FEMpowerment through table tennis to all corners of the central American country. Among the celebratory events in local clubs and three major events in different locations, a conference on female confidence and values in Esparza, targeting young female table tennis athletes.

Meanwhile, Promoter Edison Naranjo organised an open-air table tennis event for children on the Galapagos Islands. To establish a higher female participation in the long run, they organise mixed tournaments every month and want to implement a girls-only table tennis course.

In Rocca al Mare Lauantennisklubi in Tallinn, the players opted for digital and social unity while being physically distanced. Our Estonian Promoter Margit Tamm helped bring this initiative to life, starting in her club which has only female coaches. Since the usual annual WTTD tournament was not feasible due to Covid-19 restrictions, clubs all over Estonia stood united with a video collage to promote the message of FEMpowerment through table tennis.

In the state of Satna, our Promoter Lokesh Singh Bagri travelled to various locations for his female empowerment campaign PSIUS 2021 #Awareness 360. In each station, he organised a table tennis event targeting children to promote FEMpowerment and gender equality through table tennis at grassroots level. Lokesh tries to target rural areas as well as urban ones and involves the whole community: After the two-hour introductory table tennis session, senior citizens award the best performers with a prize.

In Bangalore, Promoter Dinesh Jayabalakrishnan celebrated the WTTD both physically and digitally. With a digital video campaign involving young athletes, he highlighted their favourite parts about table tennis, while their celebration included a TT Tombola, a table tennis art contest and a trick shot contest.

In the New Delhi Area, our Promoters Rahul Anand and Ajay Dudeja organised various table tennis activities over the course of several days. Their celebrations finished with an extensive tournament with 80 participants, which was used to convey the FEMpowerment message by also holding a women open tournament.

Helping children in a child labour context and those coming from a background of illegal immigration, our Promoter Houri Aghamiri creates opportunities for 130 children in Teheran to find a way out of their situations using table tennis. In the weeks around 6 April, she has visited various schools in the framework of a talent identification programme. To ensure a long-term positive social impact for the children, she also helps to introduce table tennis training in school and helps local institutions to gather the necessary equipment, such as table tennis tables, rackets, balls, t-shirts and scarves.

In St. Catherine, our Promoter Larissa McLaughlin carefully planned a table tennis workshop while respecting local health guidelines. Masked up, the Angels Table Tennis Academy showed young athletes that sport knows no gender and organised mixed activities for the participants, who were introduced to table tennis through the workshop.

Meanwhile, Tamika Osborne organised a table tennis exhibition in Kingston. She also started a photo initiative, encouraging her community to display how they support girls and women.

In Nairobi, our local WTTD Promoter Nelly Nkatha Mutuma set her focus on UNSDG 5: Achieve gender equality and empower all girls and women. Since all social gatherings and sporting activities were suspended, Nelly opted for a virtual celebration and organised an in-depth discussion on how UNSDG 5 can be achieved using table tennis. In this virtual discussion, which counted on FEMpowerment representatives of the sport, they explained what table tennis clubs can do to contribute to gender equality and how to increase female participation in their community.

To maximise their impact in the fight for gender equality, two of our Promoters, President of Priping club Kastriot Orana and President of Prishtina Female Club Besire Domaniku jointly organised two events on 6 April 2021.

The first event was held in a kindergarten in Prishtina, where the children learned the first steps of table tennis while also being taught the importance of gender equality in sports. The young audience was interested and open for the activities. The main event counted with prominent guests and speakers, among them former Kosovan president Atifete Jahjaga. She is a passionate advocate for female empowerment and gender equality across all areas. Around 30 boys and girls attended the event and got the chance to play with professional athletes and Mrs. Jahjaga herself.

In Biratnagar, Promoter Puspa Pudasain and club president Biken Thapa focused on recruiting more female players on a grassroots level and therefore organised a table tennis workshop for girls in local schools. The 10-day workshop culminated in a tournament in which the young players could turn their freshly acquired skills into action.

A picture says more than a thousand words! In Uyo, our Promoter Idongesit Umoffong organised an uplifting webinar with engaging and inspirational videos. Through the pep talk, Idongesit shared the message with local boys and girls that anything is possible and that table tennis can be a tool for a way out of the streets and achieve something great.

Ever wondered what Tahiti looks like? With their video project, Promoter Alizé Belrose takes table tennis enthusiasts to all the remote and breath-taking corners of the island! To raise awareness and increase female participation in the sport, high-profile female athletes show off their skills in various locations. Alizé also brought the project “TT1000” to life to foster female involvement in table tennis. Its aim is to help female athletes to get their coaching license and thus further developing women in table tennis.

At the Dream Building project HONECRIC in Hoima, the spirit of FEMpowerment was present in all activities: workouts, exhibitions, demonstrations, games and speeches were all carried out by girls. Under the slogan “What boys can do, girls can also do”, prominent guest speakers inspired young girls to stay in school and keep practising a sport. All local table tennis players received sanitary pads from local contributors to build their confidence and empower them to play under all circumstances.

Mónica Dávila and her team started off their cross-country celebrations in Mérida, shining the spotlight onto the girls of the community. The participants of the celebration learnt how (F)empowering managing the racket can be, and that table tennis is accessible to everybody!

We thank all our World Table Tennis Day Promoters for their dedication, passion and commitment to bring forward social issues like gender equality and female empowerment in their local communities. There is no such thing as a step too little on the path towards driving social change. And through our sport, and especially on April 6th, we proved once more that there are no limits to what table tennis can do.