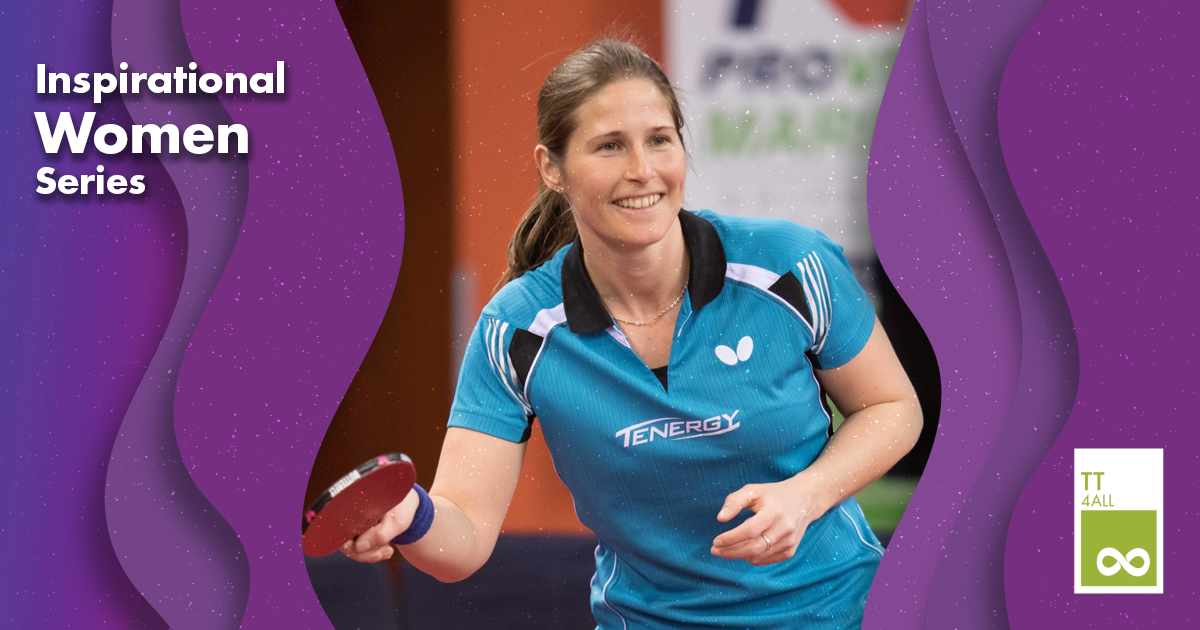 French player Carole Grundisch has faced gender inequality in many instances in her athletic career. In light of Zero Discrimination Day, celebrated annually on 1 March, we want to share the story about a woman that never let anything hold her back.

A sport for everyone

When Carole dipped her toe into different sports at the age of 8 years, picking up the paddle and playing some balls just immediately clicked for her. The atmosphere at the table tennis club in Mouchard, France, was open and welcoming, and Carole and her coach had a good personal rapport with each other. After this introduction, she quickly fell in love with the sport:

"I loved the complexity of this activity, the diversity, and the strategy you have to use to win matches. I also appreciated the fact that no matter how tall, strong or fast you are, you can play table tennis and be good at it!"

Carole has personally experienced the solidarity and support the table tennis family offers. After her successful qualification for Rio 2016, she was unfortunately not able to participate due to an elbow injury shortly before. The first weeks after the injury were difficult, especially emotionally.

"[W]ith this injury just before the Olympics, I really didn’t know if I was going to play table tennis again one day…"

But the table tennis community reached out to her with supportive and touching messages, thanking her for being an inspiration and a role model. This made Carole realize what a positive view the community had of her. This helped her getting back into the game, together with the realisation that she can be proud of her qualification for the Olympics, which has always been a dream of hers.

In the same year, Carole went backpacking around the globe for 9 months with her girlfriend. Travelling and seeing so many other cultures made her realize how lucky she was to enjoy the advantages and rights of living in a free country like France. It also made her appreciate that she was able to earn money by playing table tennis – but Carole was also aware that she could not openly display her relationship with her girlfriend everywhere.

While she experienced gender equality in the sports world, being in a relationship with a woman was never an issue or source for discrimination for Carole.

"I realised that people in general don’t care about what you do in your private life or your sexual orientation… this is something very personal."

After she accepted her own feelings, even if they were “not conventional” in society, she learnt that this was the path to be herself and to find happiness. Carole wishes for more open conversation about varieties of sexual orientation in the table tennis community.

"We are a sport dominated by the Asiatic continent, and I have to admit that I don’t know what are their opinions, cultures and behaviours about sexual orientations. I would say that opening a dialogue, or talking with famous players out of the closet from Asia in table tennis community would help people to understand and accept the differences and unknown."

Thanks to her talent, dedication and hard work, she was able to make a living out of it, and soon Carole’s table tennis career took off. She practiced every day, obtained physio and coaching diplomas and won 2 titles in the first French league, and 1 ETTU cup title. She also qualified for the 2016 Olympics in Rio de Janeiro and won 5 national title in individual competitions. However, none of these outstanding achievements seem to prevent a professional female athlete like Carole from experiencing gender inequality.

She is perfectly conscient that French clubs are making big efforts to give good contracts and more money to women, but she openly critiques that, in France, male players holding the same ranking relatively receive up to triple the prize money as female players. While the ITTF committed to paying equal prize money since 2006, it is still up to the individual clubs and personal sponsors in France. And she often hears people justifying and accepting this unfairness with the fact that females make up only 17 % of table tennis players in France. Knowing that the decisions are of political and executive nature, she raises crucial questions for the table tennis community:

"Why would I practise more and harder if the victory is not rewarded with money and acknowledgment from the community? […] What prevents a club from deciding to pay their girls with same salaries than men (when they have approximately the same ranking or percentage of victories)?"

In addition to her athletic success, Carole also uses her passion for table tennis to contribute to social causes. She is involved in the NGO Ping Sans Frontières, working alongside with Ping Sans Frontières founder and ITTF Foundation ambassador Sarah Hanffou. By putting her full dedication and commitment into her projects and never losing her values and personality, she contributes to making the world a better place by using table tennis for social development.

Carole’s advice for girls, women, and everyone else

"Be what you are, do what you want and do not try to be like someone else because the place is already taken!"

We thank Carole for talking to openly about her experiences and for sharing her story with us. The ITTF Foundation wishes her all the best for the future, and we hope that more people can join her path of being true to oneself and society.