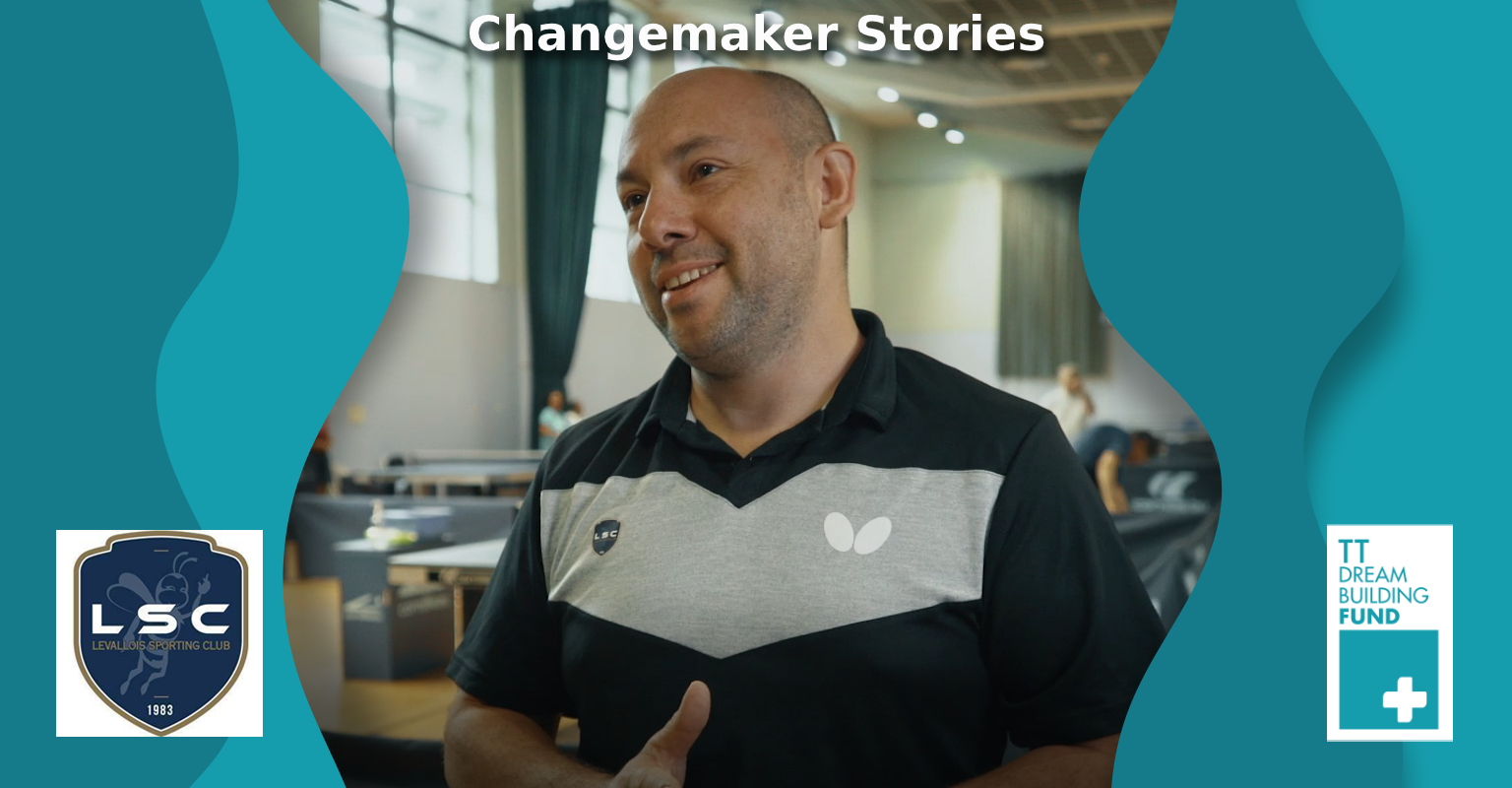 The changemaker series are a set of interviews that look to move the spotlight from the usual “project impact and outcomes” of our regular work. This is an opportunity to illustrate the humans behind the projects – those who choose to go above and beyond. We hope it will inspire others to do the same and serve as testimony that however big or small your dream, it is possible to bring positive social change to your community. These are the everyday heroes in the Dream Building Fund Programme.

Renato Walkowiak is the project leader for the Levallois Table Tennis Sporting Club Dream Building Fund pilot project Ping Pong Alzheimer's. Find out more about his motivations and his dream in launching the project but also hear his advice to anyone wishing to do something similar.

How it all started

For Renato, everything started as a table tennis player, he played competitively and reached what he calls ´a small national level´ in France. In parallel, as a people person, he naturally started getting involved and taking more and more responsibilities within his club at the time:

“At first, I simply opened or closed the hall, started helping younger groups. Slowly I realised I was more interested in transmitting what I knew and helping the club life than trying to get better as a player even though I love playing. I started working towards certifications and one day the Levallois club asked my club if they knew anyone who could fit the position of club development. At the time I had never thought of doing this professionally, I never thought of being a coach for the rest of my life. When the opportunity came, it was clear to me I wanted to do that.”

For most of the following 10-15 years, Renato focussed on club development, development of new practises, reaching new members, having an impact on the community, and growing the network. Maybe this influenced his vision of a club:

“I have always seen the club as part of the community, something for everyone. One of the big challenges for a lot of clubs is to have an offer where people can find what they are looking for, their level, build relationships, so it's tough to find the balance between performance and leisure. In Levallois, it’s a bit different to a lot of other clubs, we have 80% members that are recreational players, so it helps us to have support when we want to do other projects that target diverse groups in the community, because it's part of our DNA.”

Renato is now club manager, so he takes care of a lot more administration, but one of his priorities is also to make sure people don’t feel as they are part of a big club, that doesn’t care about the human side. He strongly believes that people make the club, so he works hard to develop projects and ensure people feel part of a small, nurturing and fun community.

“The most important part for us is the club life, it has to be rich in social interaction and a positive weekly experience.”

From Table Tennis Lover to Alzheimer's Disease Activist and Ally

This project Ping4Alzheimers also has a personal motivation, as Renato shared. His grandmother was diagnosed with Alzheimer's disease, but she lived far away, in Chile, while he was in France. Part of him felt like he wanted to help more or be more present. In 2015 he additionally worked on a ping pong video game and the game developers told him that they found table tennis to have a high cognitive stimulation as they had made games to develop the brain's cognitive development. Afterwards, he started reading more and found some research on the health benefits of table tennis and the idea started to grow as he made the connection between the potential health benefits of table tennis for persons with non-communicable diseases, specifically Alzheimer´s disease.

"In a way, it felt like I could make up for the distance – if I find a social activity that could help my grandmother and it motivated me. I went straight to one of the club members who is also a physiotherapist and one of the born members, and as a very chatty person, I started speaking more and more about the idea. So much that I had an article in a local newspaper which was seen by an Alzheimer's patients organisation called “alzheimer 92“ who contacted me. They wanted to check whether we do things well and promote the holistic well-being of the patient and their caregivers, but they were also very interested because there are not many opportunities for these populations, who often gradually start feeling excluded from society. Something else that helps the project is that the technology and science to diagnose Alzheimer's has grown and we are now able to diagnose someone much earlier than we used to, which means a lot of 40-60-year-olds have nothing offered, as senior offers start after 60-65 years of age."

“I had everything, the network, the people to support the project, the facilities; but I needed a bit of seed funding to launch the project and bingo, at the same time a friend of mine told me about the ITTF Foundation´s Dream Building Fund. It was just perfect timing and a perfect match in priorities, and I was lucky to be selected and the rest is history. Now, I have founded Ping4Alzheimers and we are looking to grow this even further.”

“We want to offer weekly table tennis sessions to persons with Alzheimer’s disease, to offer them a drug free, fun and social treatment that can help slow the progression of the disease and improve the quality of life. Above this, we want to partner with France Alzheimer’s and combine our expertise to make it a national project accessible to all clubs interested.”

"We have seen the bond and the positive environment it creates, even during Covid-19 we had some online calls to check in, that's how close everyone has become, and the caregivers are really involved – it really feels like a nice community."

The second advice is I would start with research, so you know what you are talking about and can make the connections when you meet the relevant people and know what they are talking about. Research what exists, who can help, what evidence there is, and start developing the project in your head and understand the project you want to do well, not the details but the main lines.

Finally, you must speak. Don't stop speaking about your dream, your idea, your project. Gradually, you will meet people who can help or who know someone, and it works because a project like this, it's about people, and one person cannot do it alone… you need people, it is for people, and only with people you will get it done. So yes, speak, you should speak with as many people as possible until you have what you need to start. Projects take resources (time, energy, people, money, equipment, etc.). So, even if you start small, if you know where you are going, what you want, be patient and keep sharing the dream step by step, but it's not a 9-17 job… it’s a lifestyle, it’s an internal need to do and change something that takes over. In the end, it must give you joy.”

We are really happy and proud to work with driven, motivated individuals, like Renato, and support him in turning his dream take off from a single pilot in the Levallois Sporting Table Tennis Club to a national and potentially international initiative through Ping4Alzheimers. This is exactly what the Dream Building Fund is about. People with a dream make a difference through table tennis.