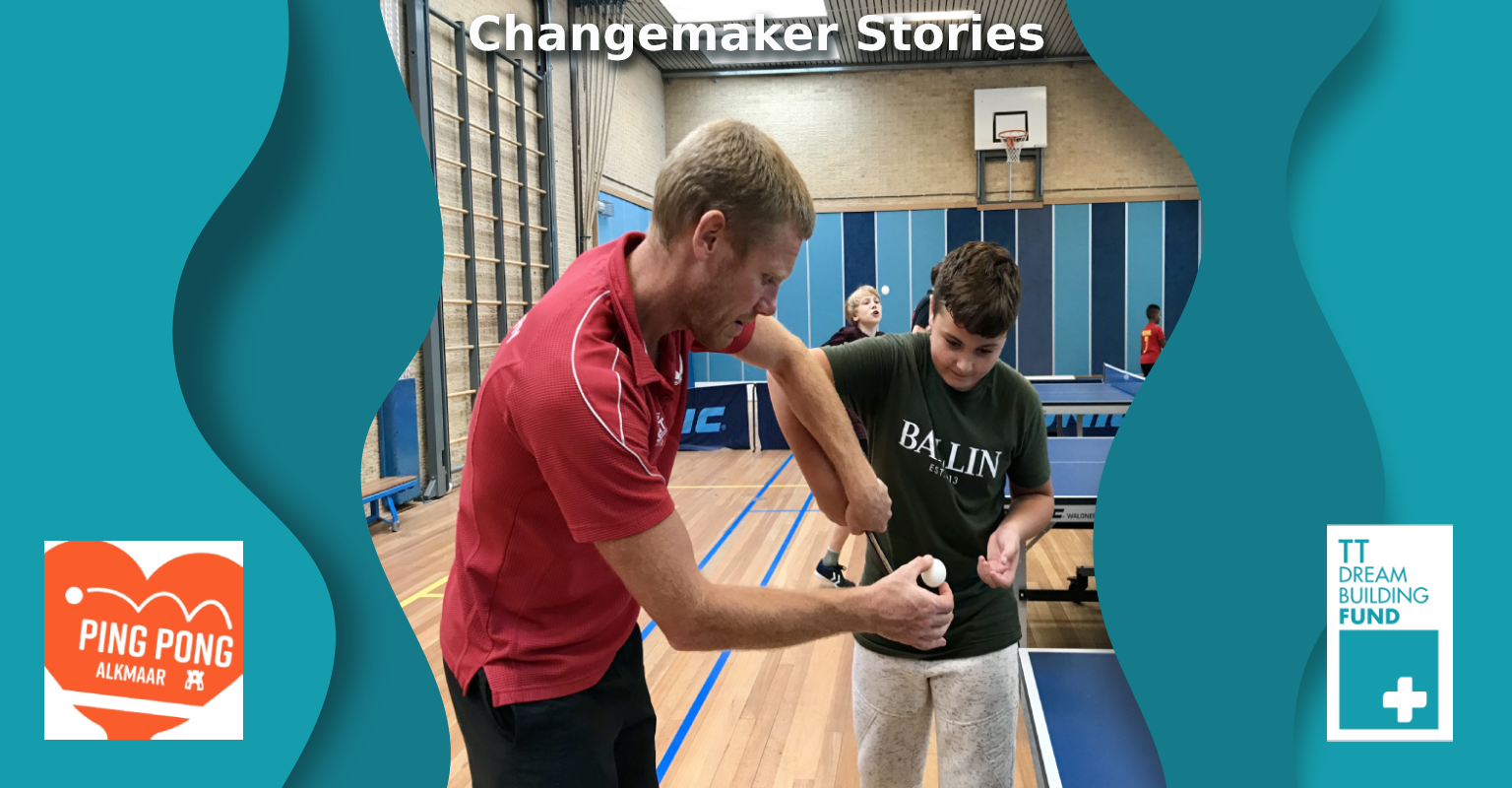 The changemaker series are a set of interviews that look to move the spotlight from the usual “project impact and outcomes” of our regular work. This is an opportunity to illustrate the humans behind the projects – those who choose to go above and beyond. We hope it will inspire others to do the same and serve as testimony that however big or small your dream, it is possible to bring positive social change to your community. These are the everyday heroes in the Dream Building Fund Programme.

A life that shaped his vision fueled by passion

Since his university days Mark has always been in Table Tennis. For over eight years after university, Mark dedicated his time and energy working in the development and coaching aspect of the sport. His experience ranged from regional development in the UK to playing professionally for Australia and extensive travel to New Zealand among other countries. During this time, he had the chance to visit, advise and learn from many clubs, focusing on a range of issues such as growing new participants and finding new financial support. In this time, he not only gathered quite an extensive repertoire of good practise examples, but also tips and tricks for running a successful club. Additionally, Mark developed an appreciation for diversity and life as an immigrant.

Mark went on to a decade with the Green House Schools charity in London where his work consisted of providing support for disadvantaged children who normally would not get the opportunity to access sport. A large portion of Mark´s job was to create a Table Tennis club within the school to offer kids the opportunity to play Table Tennis as much as possible. If the kids are aspired during the training to reach a high level, Mark provides a pathway for them to do so and organises regular travels to other clubs and tournaments across Europe.

Outlook on the current situation

“I am trying to build a club that is not only completely accessible to all ages, all backgrounds but one that the current generation can relate to and one that embraces diversity all the way through to the coaching and decision-making level of the club. We aim to offer an open club, and we go out and do lots of outreach work, obviously. We do our best to reach out and identify minority, migrant or refugee groups and build a safe space for everyone in the club.”

And it is not just talk, despite the trouble the club has faced over the past year due to Covid-19. The club has looked to adapt training outside, online, fighting to have or cancel training depending on regulations. Amid it all, the club has managed to bring in two role models:

Mark recently investigated the past of Alkmaar and learn that Table Tennis used to be a big success back in the 70´s and 80´s. They used to have between three and 500 people coming to watch a match on a Saturday. It was on the TV. A lot of professional players from England who played for the club, who were the players Mark aspired to be when he was a junior growing up. There are even discussions of merging Ping Pong Alkmaar with more established Table Tennis club in Alkmaar:

“We're looking at a three-year program now when we merge, hopefully working with the council to look at creating a full-time centre together in the city. We want this to really be a safe space that feels the heart of the community”.

"We are inspired a lot by Brighton Table Tennis Club. Although table tennis is still the focus of the club, it is much more than that for the community. They do a lot of other things around it, team building and bringing in people, working with the homeless, food, disadvantaged groups. It really is a role model club for us. Now, our focus in on making good plans."

Mark explains that he is trying to create something, a club which is based on all the values and the principles which he has learned over the last 20 years, working for all the different organizations within table tennis and seeing all the different ways of doing it. He tries to learn from the mistakes he has witnessed but also re-imagine and build with the community a club for tomorrow that is a safe space for the community in all its diversity. It seems that is was drives him and that is also very much an image of who he is. In his own words:

“My experience and dream are my motivation. What keeps me going, are those around me, the community. For example: I´m still in touch with a lot of those kids from the charity I worked for, who are now in their mid-20s. I want to combine everything I know about clubs and charity work in sports development and contribute to the community here in Alkmaar. This is what I´ve been trying to do with Ping Pong Alkmaar since 2018. Now, we have a three-year project, it is an opportunity that means I get to create something from scratch. I get to combine my learning from the past 20 years and build something that reflects my values. Living in a town, made up of a hundred thousand people and, you know I am a migrant and through table tennis, I am getting to know all the areas and all the schools because I go around them all doing clinics and setting up setting up competitions. It feels nice to know people, feel like you are slowly integrating and contributing and it's that realisation that everything's connected to each other here and that I want to bring my piece of the puzzle to it. That is the dream.”

"I have seen so many projects which have fallen flat on the faces and that the club is closed because sustainability is not there. The main reason is it is a one-person band. One individual does everything. If something happens to this person, or the person burns out, then the whole thing falls plus its usually a stressful environment."

That is what Mark has learned more than anything in his 20 years of being in table tennis club development. One must be in it and think about it for the long term and with the community one is in. Everyone in that community must feel welcome and treated with respect and dignity. This way the club can rely on a on a on a big group of people who support it and enjoy it, and only then can it be successful.

From this basis Mark has two main points to add:

“I think the importance of being part of the community is the fact that we're building a strong structure of people around the globe now who have the same values, the same ideas. but you can’t lose sight of what you are doing, for who and with who. Ultimately it is with and for the community you are in.”

Learn more about the project in Alkmaar, the Netherlands: HERE